The word knife is presumed to have possibly descended from an Old Norse word knifr for the blade. Knives are tools with a cutting edge or blade that are employed in many aspects. Some types of knives have varied uses, i.e. as utensils, encompassing the cutlery including knives used at the dining table (e.g., butter and steak knives) and knives specifically used in the kitchen (e.g., paring knife, and the cleaver knife). In addition, knives are also employed as tools, most notably, the utility knife wielded by soldiers, there is the pocket knife mostly carried by hikers and the hunting knife carried by hunters. Knives have also been used as a traditional ceremonial or religious implement or item, such as the kirpan. Some types of knives are used as combat weapons, such as daggers or switchblades. Moreover, some knives are used as sports equipment (e.g., throwing knives). Exotic forms of a knife have been fashioned for use in agriculture, and food harvesting, e.g. the scythe, the sickle and even the combine harvester, all are knives. In this article, we will discuss tactical or combat knives, generally known as fighting knives. A fighting knife’s blade is designed to inflict lethal injury and is usually used in a short range physical confrontation between two or more individuals. 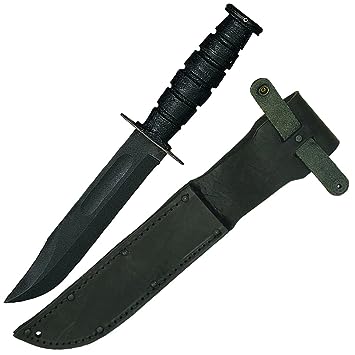 Edged weapons were known to fall out of favor on the battlefields as firearms, which were deadlier and had substantial reach, came into common use. Few military forces train with blades today, with most resorting to knife training as a last resort skill and most notably in ceremonial drills. Today’s combat knives, swords, and other traditional weapons have been reduced to gracing the walls of a collectors’ homes and offices. Tactical knives are designed with more than one purpose, primarily it is used as a utility knife, but then it can be employed as a weapon. That is the major difference in the terms combat knife and tactical knife. Folding knives, a type of tactical utility knives, are rarely designed for use as fighting knives or combat knives. However, most armies and also military organizations have issued folding “utility” knives, not intended for combat but for tactical purposes. They include, the German folding utility knives, Mercator “Black Cat”, and the Luftwaffe Fallschirmjäger-Messer, in the UK, the British Ibberson WW II gravity knife, and in the U.S. the WW II M2 utility knife, all these used by parachute troops and flight crews. Moreover, many civilian folding utility knives have been privately purchased both by civilians and military personnel mostly for use as general-purpose. Among these is the Buck Knives’ Model 110 Folding Hunter, a folding knife with lock back.

The model 110 originally marketed as a hunting knife, was employed as an emergency knife for cutting rope, strapping or harnessing by military and naval personnel. Custom knife makers then soon began making similar knives, with the intention of private purchase by both civilians and military personnel. By the 90s, tactical folding knife sales rose sharply, prompting the creation of new designs and their introduction at many knife shows. In lieu to the demand for these tactical knives, knife making companies mass produced them and sold them. It saw the rise of new companies and merging of old ones.  A folding knife basically connects the blade to the handle through a fulcrum, this allows the blade to “fold” into the handle. To prevent injury to the knife user, there is a locking mechanism. These locking mechanisms are different depending on the user specification and requirements. Critics of the tactical knife pointed out that their design was not well suited for combat in comparison with the fighting knives. The very nature of the “folding” implies that the blade had to be deployed during a fight, an impractical maneuver. Moreover, any locking mechanism has the potential of failing regardless of the lock strength, in comparison to the fixed blade combat knives. Therefore tactical blades are not ideal for fighting. A combat knife is a knife designed purely for military use and intended primarily for hand-to-hand or close combat fighting. After the end of WW I trench warfare, most military combat knives became designed with a secondary purpose, for utility use, in addition to their primary role as close-quarter combat weapons, and ultimately being referred to as “fighting-utility knives.” On the flip side, military knives designed with the primary intention to use in a utility role rather than a combat one, are essentially referred simply to as “survival knife” or “utility knife”. Combat knives were designed in antiquity as special-purpose weapons, their primary intention for use in hand-to-hand combat. 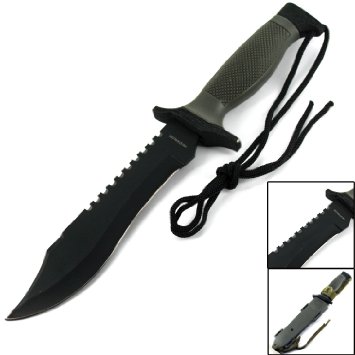 Paleolithic times. The earliest combat knives with a metal blade were the daggers. Early Bronze Age (2500-2000 BC) daggers featured copper blades, shaped with stone tools. By around 2000 BC daggers, bronze became the metal blades were fashioned from it by hammering the metal on bronze anvils. The medieval period characterized the wide use of Iron. An early iron blade served a dual purpose, a tactical knife, and a utility knife. An example worn by the Anglo-Saxon warriors was the Seax. During the latter part of the 12th century, a steel blade dagger became popular as a secondary weapon for knights. This dagger was basically a miniature sword. The first fighting daggers popular in Europe were Rondel and Bollock daggers, both are distinctive with hilts. The Pesh-kabz, a combat knife developed in the Near East to defeat enemy personnel in Leather Armor. In this period the dagger declined in military service and became popular in civilian society as a daily wear item. In Spain, the epitomized personal fighting knife called the navaja was used by members of the underworld and the working class. In Portugal, a large fixed blade knife called the faca was used as both a tactical knife and a utility knife and was an important accessory for the explorers and settlers as they conquered South America. American frontiersmen seized the opportunity of wielding large tactical knives since they faced both animal and human opponents, both of considerable ferocity. The Bowie Knife was introduced in 1827, inspired by the set of knives commissioned by Rezin Bowie, brother of the infamous James “Jim” Bowie. The Bowie knife quickly replaced earlier Native American close combat weapons like the tomahawk Toward the 1900s civilian combat knives were mass produced in a variety of shapes and sizes, but they all shared a common characteristic, they were designed for use in close combat.

In military service, traditional fighting knives were designed to fulfill other roles as well. This was unprecedented since many cultures around the world already had multi-purpose combat knives. Example, Seax of the Anglo-Saxons, the Chilean Corvo, the Gurkha regiment of the Indian Army allied to the British Empire utilized the Kukri, a broad curved blade, much like a machete and the Bolo knife in the Philippines, which was presented to service as a combat knife in both World Wars. In World War I, military adoption of the fighting knife led to the introduction of the “trench knife”, designed solely for combat use in the trenches during that conflict. On the Allied side, these “combat knives” were originally cut-down bayonets fitted with handles. As the war continued, the Allied forces began introducing tactical knives based on standardized patterns, a good example being the U.S. Mark I trench knife. In Western Europe, the German Forces wielded one dual-purpose tactical knife, the Nahkampfmesser (translated. Close Combat Knife). It was extremely popular in German military service, seeing its return into service in World War II, in slightly revised form, the Kampfmesser 42. With the exception of the German Nahkampfmesser, most of the early trench knives were hand crafted by individual soldiers or experienced blacksmiths, primarily for the purpose of stealthy elimination of sentries or watch guards and other enemy personnel during trench raids. These early basic “trench knives” were usually nothing more than shortened and sharpened standard Army-issue bayonets. One good example of a trench combat knife designed as a stabbing weapon, was the French Nail, made by cutting and sharpening the steel stakes used to support the barbed wire protecting the trench lines. Most notably, all trench knives share one characteristic: that is they are specifically combating knives designed for close combat with the enemy.

During World War II, in late 1942, the U.S. Marine Corps adopted the USMC Mark 2 Combat Knife, popularly known as the KA-BAR. This combat knife used a wide blade with a clip point, which facilitated two kinds of attacks slashing and blade thrusts. In contrast, Great Britain introduced a combat knife designed specifically for military use, the British Fairbairn-Sykes fighting knife (F-S). This knife emphasized thrusting strokes creating puncture wounds. In 1943, the U.S. Army adopted the M3 Fighting Knife as its standard combat knife. It replaced the earlier trench knife in combat service the WW I-vintage Mark I. The M3 was designed as a pure combat knife, and its limitations as a utility knife became apparent during the opening of rations and ammunition boxes. The Knifemaker Bo Randall in the years of 1942 and 1945, began producing the “All Purpose Fighting Knife” designating it as “Number 1”, in his catalog. In the 1950s Randall adopted the general pattern of the 19th Century Bowie knife for several of his combat knife designs. Bo Randall’s No. 14 “Attack” Model, designed for military use, was a popular combat knife used after World War II. During the Vietnam War, the Gerber Mark II, designed and privately purchased by most of the U.S. soldiers and marines who were serving in that conflict. In the 1970s and 1980s, the Applegate-Fairbairn Combat Knife was designed, as an improvement on the Fairbairn-Sykes thus eliminating the weaknesses of the F-S.

These blades are fashioned in a unique manner, not typical of the standard straight or curved blade with a handle. However, they were used for combat purposes, ancient communities from Africa and the Far East have been known to possess certain exotic weapons, like in the Turkana of East Africa, they had “knife bracelets” worn on the wrists but had sharp edges that were potentially lethal. The Chinese also had exotic blades that were fashioned for women mostly and assassins as well. In Japan, the ninja clans also developed exotic blades designed for combat and ease of use during assassination missions. Some weapons have come and gone, like the primitive clubs, weaponry has evolved to a point we have nuclear warheads. Knives have changed little since their conception and design, which is basically a piercing tool. The design will probably remain so. Whether you are gearing to join the military or just backing yourself with a blade, it is crucial to get some formal training in knife combat in order to fully appreciate these effective combat tool. They will never let you down no matter what.